Shasta County is committed to upholding the integrity of elections and being transparent in our processes. We complete a post-election audit during the official canvass of each election where a voting system is used. These audits are conducted in public and open to observation.

This procedure is done during the official canvass to verify the accuracy of the automated count.

Method of Selecting the Random Sample

To select the precincts, a report is generated from our voter registration database that randomly selects a precinct and then displays the contests listed.  Then slips of paper in equal size with one slip per precinct are folded and placed in a hat and shuffled.  A random number is drawn from the hat.  This is continued until we have enough precincts that cover each voting system tabulation type and each contest within the election.  While the statute mandates only 1% of the total precincts are to be audited, we may select more for additional transparency.

Procedure for the Manual Tally — Audit Board

After the precincts for the manual tally are selected, one or more boards of four people hand counts each contest using tally sheets.

A risk-limiting audit is a method of ensuring that election results match voter selections reflected on paper ballots.

The risk-limiting audit (RLA) is a procedure that provides strong statistical evidence that the election outcome is correct, or has a high probability of correcting an outcome that wouldn’t match a full hand count of the ballots. The audit itself requires human beings to examine and verify more ballots in close contests and fewer ballots in contests with wider margins.

In California, when a risk-limiting audit is used, it must confirm that the election results reported by the voting system are 95% likely to be accurate. Unlike the post-election 1% manual tally traditionally used to confirm election results in California, under a risk-limiting audit every ballot cast in the election—regardless of which precinct it was cast in—has an equal chance of being audited.

The following flowchart shows how risk-limiting audits are conducted 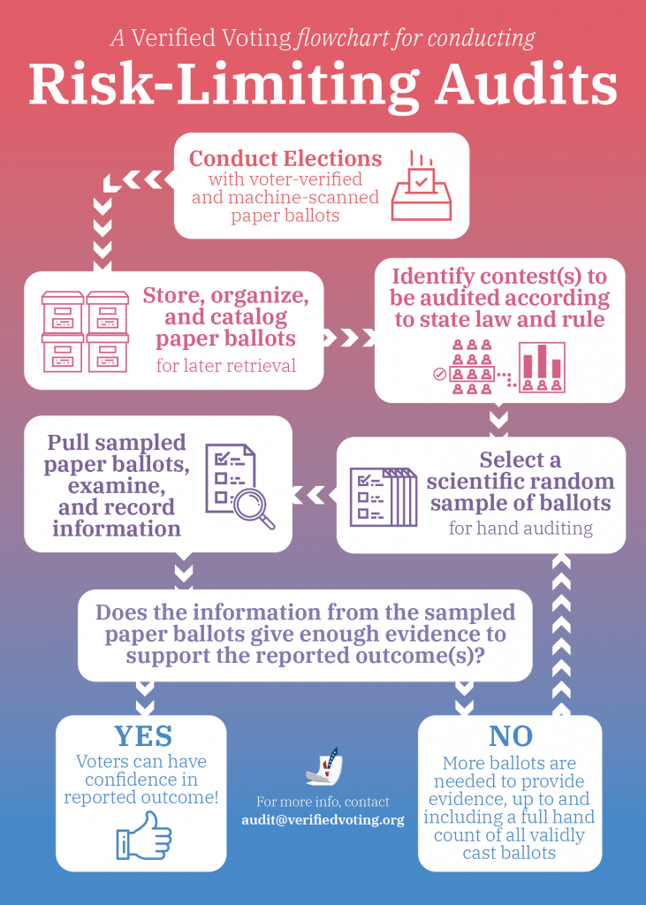 On August 27, 2020, Governor Newsom signed Assembly Bill (AB) 2400 (Quirk, 2020) to make changes to the Risk Limiting Audits pilot program created by AB 2125 (Quirk, 2018). AB 2400 permits a county to conduct a risk-limiting audit on one or more contests fully contained in the county rather than all contests held in the county as was required under AB 2125; deletes the AB 2125 requirement to conduct partial risk-limiting audits for each cross-jurisdictional contest; and extends the sunset date of the pilot program from January 1, 2021 to January 1, 2023. These changes address concerns with AB 2125 raised by the working group the Secretary of State convened pursuant to AB 2125 and allows counties to participate in the pilot program without risking a full hand count.

The Secretary of State has promulgated regulations that implement and administer the risk-limiting audit pilot program. Those regulations can be found at: https://www.sos.ca.gov/administration/regulations/.

Ballot security and chain-of-custody for ballots is essential for ensuring that the ballots are secure and have not been tampered with. The following methods achieve these goals: